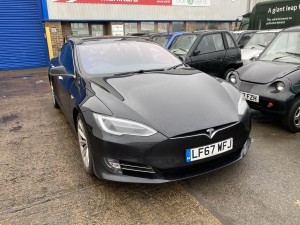 The Model S is the ultimate premium electric vehicle. Super fast, quiet, and comfortable – the Model S is a fantastic vehicle to live with.

The Tesla Model S was a completely revolutionary car when it was launched. It took the market by storm and Tesla quickly secured itself as the halo brand in the world of electric cars.

With impressive performance, fantastic comfort, and a level of practicality and space that has to be seen to be believed; the Model S will genuinely blow you away.

Tesla really do lead the market when it comes to long distance travel in electric cars. The Tesla supercharger network is so extensive that any long journey in the UK and Europe can be easily accommodated.

Due to Tesla’s “skateboard” design for the Model S; the car offers a huge volume of storage. With over 800L of rear boot space available with the seats up and a huge 1645L of storage space with the seats down; the boot can handle just about everything you throw at it. The boot capacity is actually similar to a lot of estates on the market. On top of this, the Model S offers extra storage in it’s “Frunk” front boot as well as another storage cubby underneath the boot floor. As the Model S does not have a conventional engine in the front and exhaust at the back- Tesla wisely chose to add more storage under the bonnet and in all the available gaps.

There are no reviews yet.

Only logged in customers who have purchased this product may leave a review.